skip to main | skip to sidebar

Tomatoes in progress - on the computer 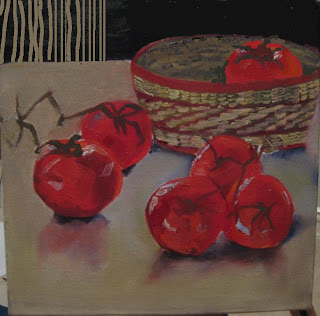 I am only just beginning to realise how useful a programme like 'paint' can be. I never could get on top of Coreldraw or Corelpaint , and don't have them on the computer any more.
But with the simple paint programme, I could draw in a missing tomato, some stripes, some shading. Magic. Some copy and paste .. it is fun!
I also realise the colour pick tool is great for assessing a shade or tone. If you have never done this... try selecting the colour of your teeth in a photograph ... across the whole smile. It is a revelation! And enough to send me to the dentist for whitening treatment.
Posted by Vivienne at 12:25 PM 5 comments:

Here are some oil sketches I have been working on with a limited palette and smallish canvases. I've been trying to loosen up and improve the immediacy of my painting and colour choices.I've also chosen a dark background(burnt umber and ultramarine blue), which is a change for me. I think it adds a bit of drama. The photos were taken on a dark and stormy afternoon, and are very subdued and a bit fuzzy, but they are not too far off what the paintings look like.
I may put these on a fund-raising show later in the year, as they want some small and saleable pieces. Garlic? Hmmm ...... not everyone's cup of tea. 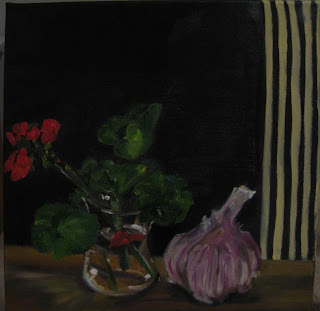 Stripey purple WA garlic, with geraniums and an edge of my much-loved old striped linen jacket (I'd wear it but for the 80's shoulder pads.... not a good look! I painted this sitting down. Only when I finally stood back did I realise how my composition had bunched into my line-of sight, leaving a big dark void above. I think the stripes balance this out a bit. Standing to paint suits me much better. 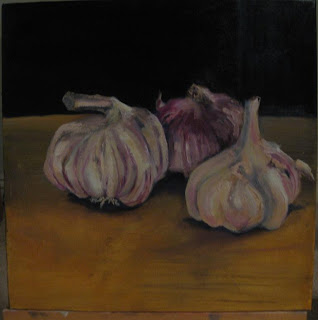 More purple garlic cloves on an ochre board, that gives a sort of sulphurous air, I think. 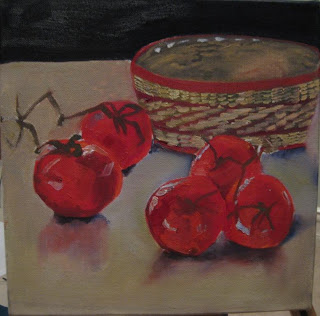 This one is still very much in progress... vine-ripened tomatoes and a basket, in which I will put more tomatoes. I put in the dark background after painting the fruit, and it certainly changed the feeling. Obviously the light coming through the weave will have to change. But there may be more stripes.
Posted by Vivienne at 10:53 PM 1 comment:

A trip to Langkawi Island 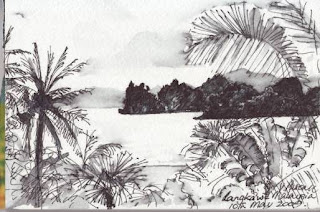 I was lucky enough to go with my husband to a conference at the weekend on the beautiful island of Langkawi, in Malaysia.
I have done so little sketching and painting of late, I felt very hesitant with pen and aquabrush, but got as far as recording the view from our room on one of those Daler-Rowney watercolour postcards. I may send it to our hosts to thank them .. or try a few in colour first, perhaps.
Posted by Vivienne at 1:14 PM 4 comments:

Dante Gabriel Rosetti painted this wonderful image of Proserpine or Persephone. Thanks to A brush with colour, who kindly supplied the artist's name.
I am not sure how the image posted yesterday is related.
I am sorry I have forgotten how to make all the right links.
Posted by Vivienne at 1:57 PM 3 comments: 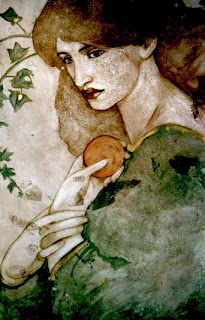 Thanks to Laura, I had an interesting time reading on the net about Persephone, and I found this wonderful image of her (artist not acknowledged... pre Raphaelite? Anyone know?). She is clutching the pomegranate offered to her by her husband and uncle, Hades (who was foisted upon her by her father, Zeus),and of which she ate just 7 seeds. Having tasted the fruit, she was bonded to spend part of each year in the underworld with Hades. Her mother Demeter, Greek goddess of the abundant harvest mourned her absence each year by withdrawing her favours from the Earth. Hence winter. With Persephone's return from her marital and underworld duties, Demeter restored growth and fertility in Spring.
"In Greek mythology Persephone, goddess of the soul, is the possessor of its dark and frightening wisdom. But the goddess Persephone is also the harbinger of spring . . . and a reminder of all the growth and hope that it brings. "
Interesting parallels with Eve? Without the concept of sin... the polytheist vs the monotheist approach? I find it all very interesting, and love the stories.
Posted by Vivienne at 9:25 AM 6 comments:

Hello blogging world. I have been absent from my page for quite a while.
I left thinking about pomegranates, and my thoughts return to them now, with a little story!Well it might ramble on a bit...
A few years ago, I asked a painting group if anyone knew where I could find a pomegranate to paint. Lovely and talented Liz turned up the next week with two beautiful, ripe pieces of the fruit . She had visited her sister in the town of Dwellingup at the weekend, to find her tree full of pomegranates, and kindly thought of me.
I was touched by her kindness, but also by the thought that Dwellingup is a pretty little forest town in Western Australia, which was almost completely destroyed by fire, over 20 years ago .
The fruit seemed to me a symbol of resurgeance and new life.
I think I am right in recalling that Liz's sister's family had experienced the whole trauma. Recent fires have devastated similar towns in the state of Victoria, on the other side of the country. Far worse as so many lives were lost. WA has been less affected of late, and I am sure our preventative burning of fire breaks is the reason. Greenies, beware of what you wish for!
Anyway, back to the pomegranates!
I painted them in oils. 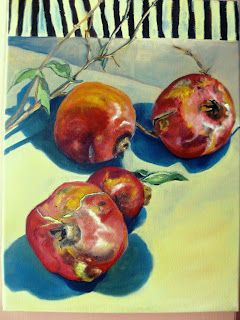 This hangs in our dining room , with some quince and fig paintings, each 12" X 16".......................................................
Then we ate them.
But I kept some seeds to plant.
They grew into tough, thorny little bushes.
I had bought two cast iron urns for my husband's birthday, which got so hot and dry in the sun, that almost nothing would survive in them.
But I thought of the pomegranate that survives in the desert and is in so many Middle Eastern recipes.
Two bushes went into the urns, where they have done really well, and after a couple of years there, have started producing fruit.
I have almost killed them a few times, when they have been deprived of water while we have been away,but they keep coming back. One is being nursed back AGAIN as I write, so I thought I must photograph the other for posterity, just in case. My husband just ate the biggest pomegranate!
I have every intention of painting the daughter fruit, and hopefully growing grandbaby pomegranate trees for the Dwellingup parent.
My photo shows a very sparse lookng plant. The leaves are small, and it has lost quite a lot in our recent absence, but looks better in real life.
Excuse the messy area.. ahem... that is where I should be at work, not on the computer.
The dog is Harrison, licking his lips. He probably would eat the pomegranates, as he has just consumed our pretty crab apples, green tomatoes on the bushes, and is eyeing the ripening passion fruit.. 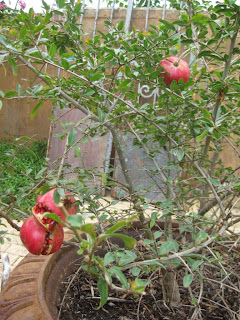 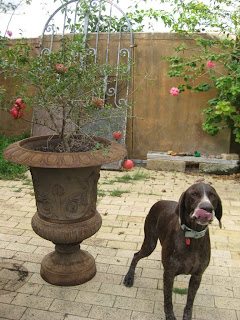 Pomegranate - a quick one 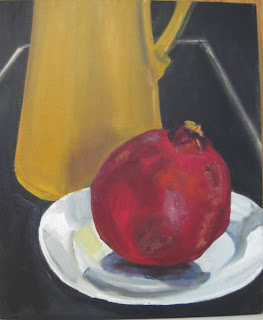 I have been long lost in admiration for people like Julian Merrow-Smith whose wonderful archive of his daily painting of daily delights in Provence is testament to his talent and discipline.
In that spirit, I thought to do the occasional very fast oil painting of simple subjects that appeal to me... minimal tweaking and overpainting... an effort to get a fresher result, and to learn to 'see' better, first go.
I doubt I will ever be able to do a painting a day!
I prepared a dark background ..another new experience.. I am never that organised.... and found that to be very helpful and satisfying. In this little painting ...10"X 12", on linen, I am happiest with the plate. And guess what? It was the only bit truly painted without further tweaks. Lesson to self.
Barack Obama is about to make his victory speech (Wednesday2pm our time). My prayers and best wishes go to all my American family and friends for this new era in your wonderful country.
Posted by Vivienne at 1:49 PM 11 comments: